Wehrmacht Ersatz-Funkkraftwagen (Replacement-radio-truck) - How a Citroen U23 becomes an Wehrmacht Kfz.61

This will probably be the biggest project I'll ever tackle.
But in 2019, after careful consideration, I have finally decided to start this project!
All progress on this project will be published here on www.nachrichtentruppe.de in the form of a blog.

A puzzle that starts at "0"

What do I want to do?

I would like to build the radio car with which my grandfather had witnessed the half of the Russian campaign (Unternehmen Barbarossa) of the german Wehrmacht in the second world war.

Many people are already familiar with this radio car. It is the radio car on my startpage: 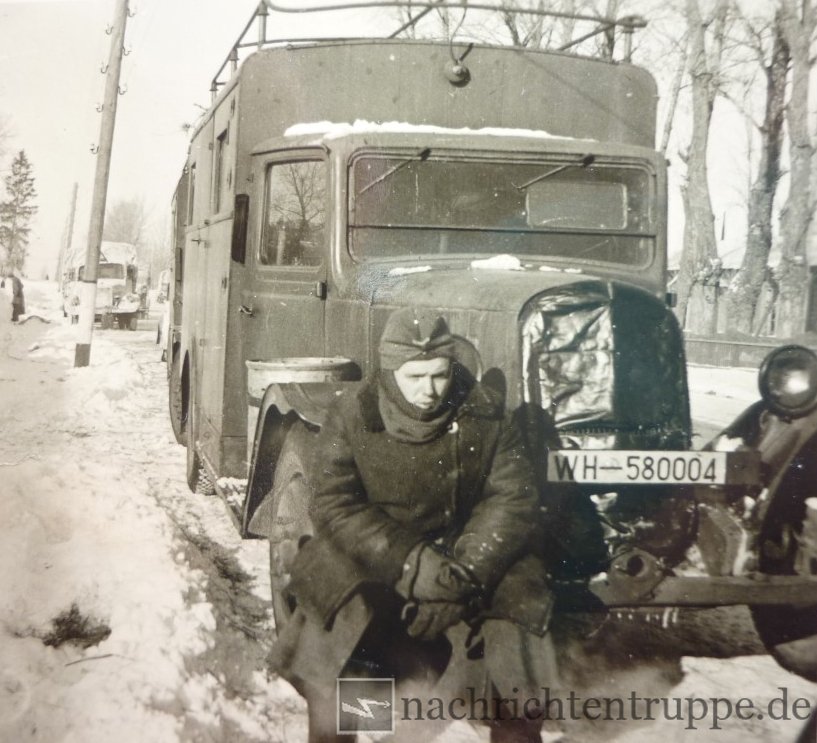 This picture was actually taken by my grandfather in the winter of 1941 in the front of Leningrad. But the radio car accompanied my grandfather until the end of 1943 and the beginning of 1944. What happened to it then will unfortunately remain forever in the unknown.

It has always been my secret dream to rebuild, drive and maintain this radio car.

But the beginning is difficult, because: I have only a few pictures from my grandfather's photo album and it actually started with the fact that I first had to find out which type of vehicle it is.

But why do you already have your own website and are known in collectors circles... Surely someone will find who can accurately determine the car.
And yes, I was a lucky guy!
A friendly, in collectors circles well-known collector could identify the car very quickly: A Citroen U23!
Now I already knew what I wanted to build up there and could define a goal:

I will build an authentic, original (replacement-)radio truck (Ersatz-Funkkraftwagen) of the Wehrmacht. The carrier vehicle is a Citroen U23 (type 23).

Incidentally, the Citroen U23 was delivered to the Wehrmacht in relatively large quantities. The interesting thing is that it was not actually used as a radio car. And that's what makes it complicated, but more about that later!

So that's the beginning. I know the vehicle type. But what is next, logically?

At the beginning there were general considerations:

From the friendly collector, I have received several tips. He himself has already restored and built two Kfz.17 vehicles of the Wehrmacht, so he has really gained immense experience and is certainly an absolute expert in this field.

An important advice from him: The radio equipment and accessories must be given special attention!
This means that in order to be able to correctly define the correct dimensions of the interior and also of the radio-cabin, most of the accessories should be present. Luckily I already have a lot of accessories. Some parts are still missing, but I will write more about it in another part of this project.

Incidentally, the radio truck body is the box-like truck construction that served the soldiers as accommodation for their communication activity. More details will be given in a later part of this project. 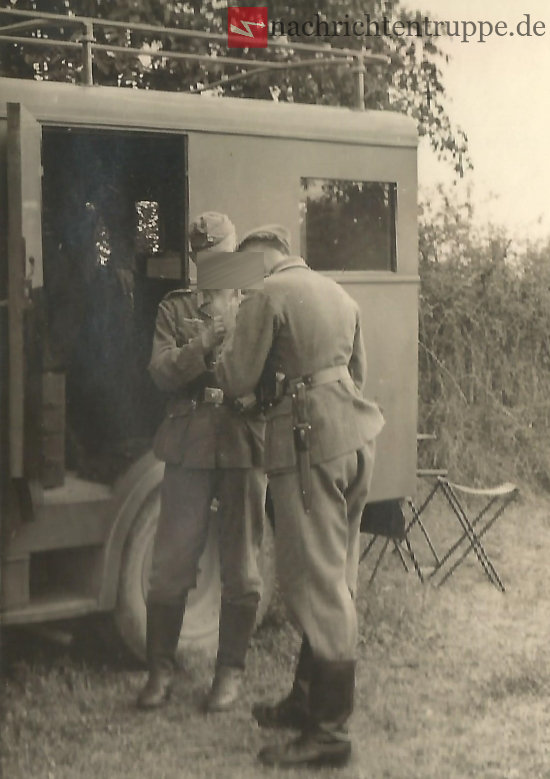 There are still some more pictures available, but all are unfortunately in the "detail level" shown. The interior can only be guessed. So you can not really talk about "details".

To proceed as logically as possible I divide the project into three subprojects:

So I have the opportunity to work orderly on all three subprojects and then put them together at the end of the major project "Ersatz-Funkwagen Citroen U23" of the Wehrmacht.

Some facts collected so far on these three subprojects:

What we know about the truck:

The Citroen U23 was delivered in larger numbers to the Wehrmacht. Also, many were used as captured vehicles from the French and Polish army. It had a payload of 1.5t to 1.8t. These trucks were, however, usually used as a supply truck, at least that comes out of the mass of pictures I've found so far in the web. Apart from that I collect for over 20 years photos of radio vehicles of the Wehrmacht. I have never seen such a Ersatz-Funkwagen (replacement radio truck) (apart from this one). Whether te U23 was delivered to the Wehrmacht or whether it was a captured vehicle remains unknown for now.

What we know about the radio truck body:

In any case, this Citroen U23 is used here as a so-called Ersatz-Funkkraftwagen (replacement radio truck). This means that the soldiers have made a radio car from an existing vehicle by making appropriate changes to the existing truck body. As a rule, the truck body has been completely rebuilt and specially designed. But in exactly this truck body I am not so sure. Although there were truck bodys for the Citroen U23, but this radio "box" is special, because it seems as if it was made of sheet metal which is absolutely atypical for radio box body structures of the Wehrmacht.
As a result, this means that I still have to do a lot of intensive research here. Eventually, an existing truck body of the French was used. So the question is if there was such a box body?

What we know about the used radio technology and equipment:

Surely I know that there was an Torn.E.b. (Tornisterempfänger Berta) - the receiver - in the radio car. For transmitting there was a 100 W.S. in the radio car. (100 Watt Sender).
Both can be guessed with a lot of imagination. Certainly you can see in the last picture a wrapped Torn.E.b. standing in the door with it's accessory box. Possibly, there is even a Torn.E.b  standing in the background. In some pictures that I have here you can see clearly a 5m mast with a Schirmantenne 3/3.
Because of the devices and the stories of my grandfather, I also know what radio unit used this truck.
The setup must be done for a "Mittlerer Funktrupp b (Motorisiert)" what means in eglish something like "middle radio group b (motorized)" - (m.Fu.Tr.b (mot)).
I will write much more about these units in a later post on this project.

Due to the size, the equipment and all other information gathered so far, it is most likely a replacement radio car (Ersatz-Funkwagen) for a German Wehrmacht Kfz.61.

Therefore, I would now like to start a search request on my website and ask all readers to please share this search whenever possible and make public.

Who has information, parts or even an original Citroen type 23 to sell, you can always contact me under the following data:

I am very grateful for any help, and about any other piece of the puzzle! :-)

Here you can find the articles published so far about this project: 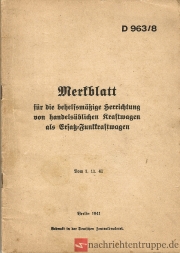